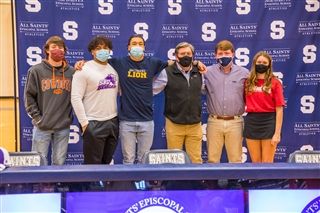 2/3/2021
All Saints' celebrated five student athletes this morning who committed to play athletics at the collegiate level. These five join the ten students who signed their letters of intent this fall. Please join us in congratulating these seniors on their success in the classroom and on the field.

Ethan Dial, Golf – Texas Christian University. Ethan is a Lifetime Saint. He has always been elite on the course and in the classroom as well. Ethan has won tournaments such as Glen Rose Tournament 2018 & 2019, DFW Elite, Lone Star Showcase and the Bridlewood Classic. He also finished in the top five in the Fort Worth Junior, Top 10 in the AJGA Junior Texas Open, and top 20 in the Junior Byron Nelson last summer, which is arguably the top junior event in the nation. He was named All-District, Region, and State each year since his freshman year. Ethan is the third ranked Texas Golfer in his class and Top 150 in the country. Other offers include Lipscomb, Texas State University, University of Houston and Rice.

Peyton Kramer, Football – Oklahoma State University. Peyton is a four-year letterman for All Saints’ Football who started at both corner and wide receiver for two years. In his ironman-like career, he accumulated over 1,000 yards receiving, 11 touchdowns on offense, 50 tackles and two interceptions. Peyton has decided OSU over Mary Hardin Baylor, Ottawa University and Southwest University.

Tony Lacy, Football –Texas A&M Commerce. Tony joined the All Saints’ family his junior year and is a two-year varsity athlete. He played wide receiver and free safety, and Tony’s dynamic ability notched him 160 tackles and four interceptions on defense, and nine touchdowns playing receiver on offense. He has accumulated offers from school such as William & Mary, Illinois State, and Georgetown.

Victoria Pipinich, Field Hockey – Wittenberg University. Victoria has been a four-year starter on the Varsity Field Hockey team. She is a three-sport athlete at All Saints’ (field hockey, soccer and track). “Pip” received multiple offers for both soccer and hockey, some of which included DePauw University and Belmont Abbey. She is a two-time All-State Field Hockey selection and 2020 MVP. As one of our captains this fall, she helped lead her team to their second state championship in four years. While attending Wittenberg, Victoria will study abroad in Germany for a semester.

Elijah Posiulai, Football – Southwest Baptist University. Elijah has attended All Saints’ since his freshman year and is a four-year varsity athlete. He has played both nose guard and three-technique through his 33 game career. His combination of strength and athleticism helped him amass over 140 tackles and 17.5 half sacks. Elijah also received offers from Georgetown and Dartmouth.
Back
CONTACT        |        DIRECTIONS        |        CAREERS
All Saints’ Episcopal School is a leading college preparatory day school in Fort Worth, Texas. Grounded in the Episcopal school tradition, All Saints’ offers programming of national distinction in the academic, fine art, athletic and spiritual disciplines, which brings to life our philosophy of promoting each student’s individual genius within.
All Saints’ Episcopal School © 2013