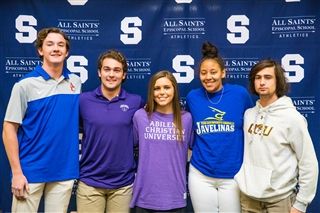 Jack Hardgrove – Baseball – Angelina College. A Lifetime Saint and three-year letterman, Jack has anchored the Saints’ defense as the starting right fielder and led the Saints’ offense in homeruns in 2019. Jack earned 2019 TAPPS Division I 1st Team All-District as well as TAPPS Division I All-State Honorable Mention. Jack received additional interest from Pepperdine University, Richland College, Hendrix College, Jacksonville State University, and Blinn College.
Blaine Lowrance – Lacrosse – Quincy University. Lowrance has attended All Saints’ since 2nd Grade. He has played lacrosse for six years as a member of All Saints’ Club Lacrosse team as well as Chaos Lacrosse Club based out of Frisco, TX. Blaine has earned multiple Division II Texas All-State and All-District nominations and will attend Quincy University, a strong NCAA Division II program in Quincy, Illinois.
Aiden (AJ) Mendolia – Baseball –University Central Arkansas. AJ has attended All Saints’ since 8th Grade. As a four-year letterman, AJ has played a key role in the Saints’ success as a catcher and middle infielder.  As a junior, he earned 2019 TAPPS Division I 1st Team All-District honors and was named the district’s Utility Player of the Year. He received 2019 TAPPS 2nd team All-State honors and Academic All-State honors as well. AJ also received interest from Mississippi State University, Pepperdine University, University of Texas San Antonio, Texas A&M University Corpus Christi, George Washington University, Yale, Brown, and Dartmouth College.
Taylor Morgan – Basketball – Abilene Christian University. Taylor has been at All Saints’ for two years and is a two-year letter winner in Women’s Basketball. She helped lead the Saints to a 24-7 finish last season and a Sweet 16 berth in the TAPPS 6A State Playoffs. For her efforts, Taylor was named 2019 TAPPS District 1 Offensive Player of the Year. Additionally, she earned 1st Team All-District, 1st Team All-State, Academic All-District, and Academic All-State honors. Says Head Coach Tracey Stellato, “Taylor is an exceptional competitor. She, along with Janessa, have done an amazing job of helping to establish a culture of success here at All Saints’ in just two short years. I have no doubts about Taylor’s success at the next level because she brings it every day.” Taylor is pursuing nursing as her academic major and chose Abilene Christian University over West Point, Texas State, Texas A&M-Corpus Christi, UC Santa Barbara, and West Texas A&M.
Janessa Payne – Basketball – Texas A&M University-Kingsville. Janessa has been at All Saints’ for two years as a member of All Saints’ Women’s Basketball program. She has garnered several post-season awards and has been a huge part of building the program’s culture. Head Coach Tracey Stellato remarks, “Janessa is skilled, hard-working, coachable, and extremely loyal to her team and her teammates. Her success, both on and off the court, is no surprise for those four reasons. I am so excited for her next adventure in the game of basketball and I am very grateful that I got to be a part of this chapter of her life.” Janessa chose TAMU-Kingsville over Hardin Simmons University, University of Texas-Dallas, Oklahoma City University, and Texas Women’s University. She intends to major in psychology or pre-med.
Back
CONTACT        |        DIRECTIONS        |        CAREERS
All Saints’ Episcopal School is a leading college preparatory day school in Fort Worth, Texas. Grounded in the Episcopal school tradition, All Saints’ offers programming of national distinction in the academic, fine art, athletic and spiritual disciplines, which brings to life our philosophy of promoting each student’s individual genius within.
All Saints’ Episcopal School © 2013