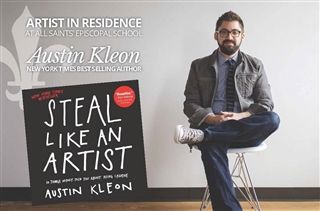 9/15/2015
New York Times bestselling author, Austin Kleon, will join the All Saints’ community and engage in creative problem solving with students on September 30 and October 1. Scheduled events include half-day collaborative workshops, a presentation to the Upper School student body and an artist talk with the entire School community. Kleon will also develop “blackout poetry” stations and inspire students of all ages to see creativity as an essential skill that our School can nurture and develop.

Kleon is best known as the author of Steal Like an Artist, a New York Times bestseller that critics have called "an inspiring guide to creativity in the digital age."

How to Steal Like at Artist:
Reception, Artist Talk and Book Signing
Wednesday, September 30, 2015
6:00-7:30 p.m.
Simpson Upper School’s Martin Commons
9700 Saints Circle, Fort Worth
RSVP: aseschool.org/Kleon
About the Author
Austin Kleon is the New York Times bestselling author of three illustrated books: Steal Like An Artist, Newspaper Blackout, and Show Your Work! His work has been translated into over twenty languages and featured on NPR’s Morning Edition, PBS Newshour, and in The New York Times and The Wall Street Journal. New York Magazine called his work “brilliant,” The Atlantic called him “positively one of the most interesting people on the Internet,” and The New Yorker said his poems “resurrect the newspaper when everybody else is declaring it dead.” He speaks about creativity in the digital age for organizations such as Pixar, Google, SXSW, TEDx, and The Economist. He grew up in the cornfields of Ohio, but now he lives in Austin, Texas, with his wife and sons. Visit him online at www.austinkleon.com.

About the Honors College
The Tad Bird Honors College is a four-year program that encourages highly engaged, curious All Saints' students to pursue intellectual passions and servant leadership in creative and innovative ways.